Swedish Carols and Christmas Songs. Christmas is the biggest and longest festival in Sweden. It starts from the first Sunday of Advent.
Celebrations begin on December 13, the day of the holy Lucia. Legend says that during the longest night of the year, when men and animals need extra food. At home, Lucy (The Queen of Light) is portrayed by the eldest daughter. Girl dressed in a white dress, and upon her head a crown of candles. She wakes her parents by singing the familiar Italian song “Santa Lucia” and brings them coffee, sweet rolls, cookies, and “glögg” well as. “Glögg” is hot wine. 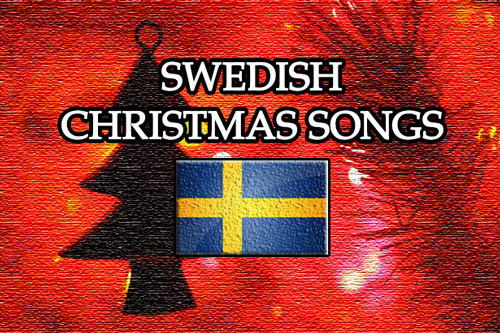 In Advent kids have candles advent calendars with chocolate candies. But in shop’s windows and on the streets for at least a week before Christmas there are star ornaments, especially beautiful before Christmas, commercial Sunday when the exhibition sparkle with Christmas decorations. In Sweden, christmas gifts are called julklappar, which literally means the same as “Christmas knocking”. The term, adopted a long time before the appearance of Santa Claus (Jultomte), came from the fact that on Christmas Eve sneaks up to the door of the person who had to get a gift, pukano in not thrown gift inside and escapes, disappearing up in the darkness of night. chocolate candies.

Introduced to Sweden from Germany Christmas tree is part of Christmas in Sweden since 1700. However, only in the twentieth century has become a common practice. In almost every Swedish home for a day or two before Christmas kids brings the tree and decorate them with sparkling objects, gaily wrapped sweets, straw ornaments and electric lights or candles.

Christmas Eve is the culmination of celebrations. According to tradition, it is the day on which should not be done no work other than the care of livestock. This is the day of the Christmas feast, which includes smorgasbord. Swedes have their own traditional dishes. Holidays end on January 13.

The tradition of singing Christmas carols and songs still exists in some Swedish homes, although more often listened only American Christmas song from the TV like Last Christmas.

Wishes for Christmas in Swedish

Below is a list of the most popular Christmas songs in Swedish. Swedish carol is “Julmusik”