Greek Carols and Christmas Songs. Almost 95% of the Greek population belongs to the Greek Church – the Eastern Orthodox Church. Greek Church as well as the Catholic Church celebrates Christmas on December 25. Greek Christmas is a quiet, solemn period. In some regions, it is preceded by fasting. Hot period begins on December 6 on Saint Nicholas Day (St. Nicholas), when all people exchange gifts and lasts until January 6 – Twelfth Night. On the day before Christmas and the New Year children going from house to house and singing carols and christmas songs. These carols are sung to bless the house. Often, these carols are sung to the accompaniment of a small metal triangles and little clay drums. For singing, children are rewarded with sweets and dry fruits. The word carol comes from the Greek dance called the “Choraulein” which was danced to Greece flute music. Later, it became popular in Europe but most in France, where in addition to flute music yet begun to sing. Originally carols were sung during different festivals but mostly it was sung at Christmas time. In Greece, New Year’s Day is St. Basil’s Day (St. Basil) it is a time for giving gifts themselves. Thus St. Basil is the right Greek Santa Claus. 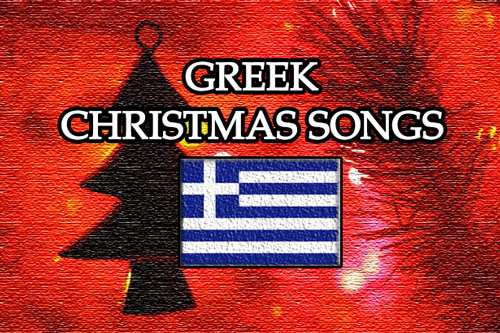 Wishes for Christmas in Greek

Below is a list of the most popular Christmas songs in Greek. Carol in Greek is “kálanta“: